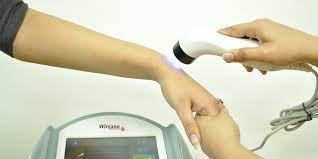 L.A.S.E.R. stands for Light Amplification by Stimulated Emission of Radiation. Laser Therapy involves the application of low-intensity laser light to relieve pain caused due to the damage of soft tissue. It facilitates tissue repair and restores normal cell function. It is used by experts to heal wounds and pain. The level of light is quite low as compared to other forms of Laser Therapy, such as those used to destroy tumors and coagulate tissues. High-power lasers are known as hot lasers because of the thermal response they generate. They are used in surgical cutting, and coagulation conditions, destroying tumors and coagulating tissues. Low power lasers act according to the Arndt-Schulz principle which states that if a stimulus is too weak, no effect is seen. Increased stimulation and optimal dose lead to the optimal effect, while further dose increase leads to a decreased effect and furthermore increase leads to inhibition of stimulation is also known as photobiomodulation, used in wound healing and pain management. Low laser is a pain-free, non-invasive method. It has the properties of monochromaticity (same color), collimation (all rays are parallel to each other and do not diverge significantly even over long distances) and coherence (all the light waves are in phase both spatially and temporally). This procedure is generally safe, effective, and non-invasive to use. Although you will feel the laser device touching your skin but the procedure is painless, no vibration or heat is felt. The non-thermal photons of light that are emitted from the Laser, pass through the skin layers. Once the light passes through the layers of the skin and reaches the target area. The body tissue then absorbs the light and initiates a series of events in the cell resulting in the healing of damaged or injured tissue, reduction in pain and inflammation, and an overall reduction in healing time by increasing intracellular metabolism. Get the best laser therapy from PHYSIO 2 GYM HEALTH.